A heavy body, long travel suspension, and wide sidewall tires hold up best to bumps and dips in the road. 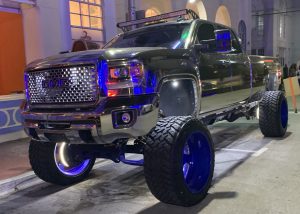 Where it comes to potholes and pothole-induced damages to vehicles, we generally consider the pothole to be the problem that needs fixing. Ultimately, eliminating potholes will benefit all users of the roads, from the smallest Fiat to the largest 18-wheel semi-truck.

But due to the ubiquity of potholes, found coast to coast in America and pretty much everywhere else on the globe, it might make sense to throw in the towel. At least in the short run. Why not accept there are potholes yesterday, potholes today, and potholes tomorrow? Why not address the symptom, which is damaged vehicles, tires, and wheels, with the most resilient vehicles available on the market?

Pothole-caused vehicle damages can be expensive. As reported previously on Pothole.info (“The Cost of Car Damages from Potholes”) those costs are big and varied – and might have increased with the current (2022) rate of inflation, particularly in the automotive sector. Tire replacements cost $75-$300, bent wheels between $50 and $500, and a suspension system damaged by rough roads can run as high as $5000 (struts and shock absorbers, wheel alignment, and ball joint replacements included).

So are all vehicles equally vulnerable to potholes? No, they aren’t. Some are designed to withstand rough pavement, and some just have the characteristics that favor pothole resilience. Those characteristics include having a heavy body (trucks and SUVs obviously get the advantage), and long travel suspension, both of which offer a smoother ride and greater stability.

According to Warranty Direct, the most pothole-resilient brands are:

This doesn’t include the vehicles rated for off-road toughness, which, basically, are all versions of Jeep-like vehicles: Chevrolet Colorado Zr2, Ford Bronco, Ford F-150 Raptor, the Jeep Gladiator Mojave, and Jeep Wrangler Rubicon, among others.

The least resilient brands include many of the luxury automakers:

The UK has its own list, with models less familiar to American drivers. Performing best in potholes are Fiat Panda City Cross, Suzuki Ignis, Citroen C4 Cactus, Skoda Octavia Scout, Volvo S90, Foprd Focus Active, Dacia Duster, and the Mercedes S-Class. The top-rated Fiat in this list, unlike the American model, is a two-wheel drive vehicle “ready to tackle the urban jungle, rather than a proper jungle,” says BuyACar.co.uk. “Body armor and raised suspension will also ease the pain of discovering what you thought to be a pothole is actually more of a small quarry,” says the site.

Tires in their own pothole category

Where it comes to tires, the bigger the sidewalls (the distance between the wheel rim and the pavement) the more likely the tire will survive a pothole hit without the rim cutting into the rubber. What this means is that the larger the wheel, which has to fit within the wheel well, the smaller the tire and tire sidewall. Standard tires sizes are 16 inches, but in the aftermarket some drivers of muscle cars and trucks will switch out for wheels as big as 24 inches. The bigger ones obviously have smaller (thinner) tires.

Says Car & Driver magazine, “If you match larger-diameter wheel sizes to lower-profile tire sizes … [it] means your tires have shorter sidewalls, which means stiffer sidewalls, and a higher chance for blowouts should you hit a pothole.”

While we don’t have the exact measurements, the monster GMC truck in the photo may have, despite its intimidating look, smaller and hence more vulnerable tire sidewalls.

Looks can be deceiving. Potholes are blind.