It’s that time of the year: If the black ice doesn’t get you, the potholes might. And so might the ice bumps.

Ice bumps? Well, yes – but to be clear ice bumps or ice mounds should not be confused with black ice, those frozen areas of the roadways that, thanks to a combination of rapid freezing of snow or sleet, are so clear and flat because they lack bubbles to give them a lighter color. Instead, black ice takes on the color below it, usually black asphalt. And it’s very dangerous because the unsuspecting motorist can slide on it since he or she does not anticipate such a slippery surface, assuming it’s just a nice flat stretch of pavement. Black ice often lasts longer if it is mostly in shade, areas such as in tunnels, underpasses, bridges, and where there is minimal direct sunshine due to buildings or coniferous trees.

Ice bumps can be more visible to approaching vehicles. They are the convex counterparts to concave potholes. Ice bumps form where traffic on snow compact the white stuff, mix it with dirt, and then freeze solid with a drop in temperatures. The biggest ones can be hazardous to a car’s undercarriage, slippery to vehicles – or a slip-and-trip hazard to runners, some of whom in these pandemic winters run on roads instead of sidewalks.

Traffic and perhaps random and irregular salting eventually wear these icy patches of compacted snow away. But like black ice, they can last a little longer than melting snow on the sides of road and consequently catch motorists unaware.

Potholes are the most persistent of these winter road problems. Because standard asphalt cannot be laid in wet, cold conditions, the typical repair of cratered roads in mid-winter is a temporary asphalt fill. More sophisticated pothole fillers can be used to create a permanent repair where departments of transportation use polymer-modified cold asphalt. Preventive maintenance is almost always the most economical choice where it comes to pavement preservation. 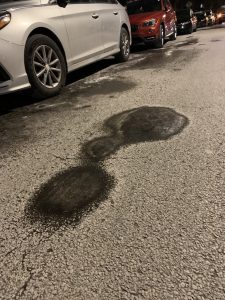 So beware the patches, potholes and bumps. In a bad winter, the streets can be a battlefield.