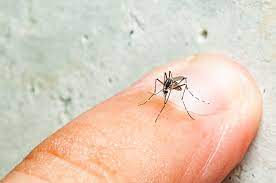 With the onset of warmer weather in North America, it’s time to think about mosquitoes. In particular, mosquitoes that breed in potholes and carry deadly diseases.

Potholes hold water – by definition, standing water – that offers the world’s peskiest insect a place to breed. Homeowners are urged to rid their property of water that collects in puddles and low spots, in rain barrels, in birdbaths, and just about any container that collects rainwater. But potholes in publicly-managed streets are largely out of their purview.

It’s been happening probably as long as there have been roads. The matter of mosquitoes in potholes has played out in tropical regions around the world, particularly in India, African countries, and Brazil. But in New Orleans, it became a bigger issue in 2016 when the Zika virus, which is transmitted by the Aedes mosquito, migrated north to infect 5,168 people in the US (source: the US Centers for Disease Control and Prevention).

Fox 8 News (WVUE-TV) in the Crescent City reported on August 6, 2016 that, “the city’s water leaks and potholes may be one of the biggest culprits for breeding mosquitoes,” it said.

A New Orleans infrastructure activist, Jeff Janusek of Fix My Streets, told the television news station, “There are definitely potholes where there is water that has been sitting there for over a week…we’re here to say let’s get these streets fixed properly, and let’s get rid of the notion that there may be standing water in a pothole for a week.”

Places that experience monsoon seasons, such as India, see this problem in a more pronounced way. DNA India, a news website on the Subcontinent, reported in a 2017 a story titled “Deadly potholes are turning into breeding spots for mosquitoes.” The writer blames neglect of potholed streets for being responsible for a rise in mosquito-borne diseases, quoting one citizen as saying, “The civic body has one more reason to improve the condition of the roads. Apart from it leading to accidents and deaths, now we hear from health experts that it is leading to dengue and malaria.”

When water is in a pothole, it’s also problematic for permanent repair because standard hot mix asphalt needs dry surrounding surfaces to tack properly. But EZ Street Premium Cold Asphalt, made with modified polymers, can create a permanent repair, even in cold and wet conditions.

Fortunately, the presence of the Zika virus has waned in the years since 2016 – to 452 infected individuals in 2017, and by 2020, a year when public attention was on a different virus, it fortunately dropped to four cases.

Infectious diseases can be effectively managed, as can rough pavement. It appears that filling those potholes handily addresses two problems with a single solution.