British motorists seem to honor, dubiously, potholes more than we do in America. It’s not like US motorists suffer car damages any less from bad pavement.

Dead men may tell no tales. But on National Pothole Day 2020 – an event every year in the UK on January 15 – some dead hubcaps are talking.

So it seems, anyway, from a press kit received at Pothole.info from our colleagues across the pond at Potholeboss.com. As it happens, those hubcaps know what hit them: by their descriptions it seems to be a universal experience for motorists everywhere. When a car hits a pothole, all kinds of damages occur. Some of those damages can be pretty pricy, such as $1200 to replace a cracked catalytic converter. 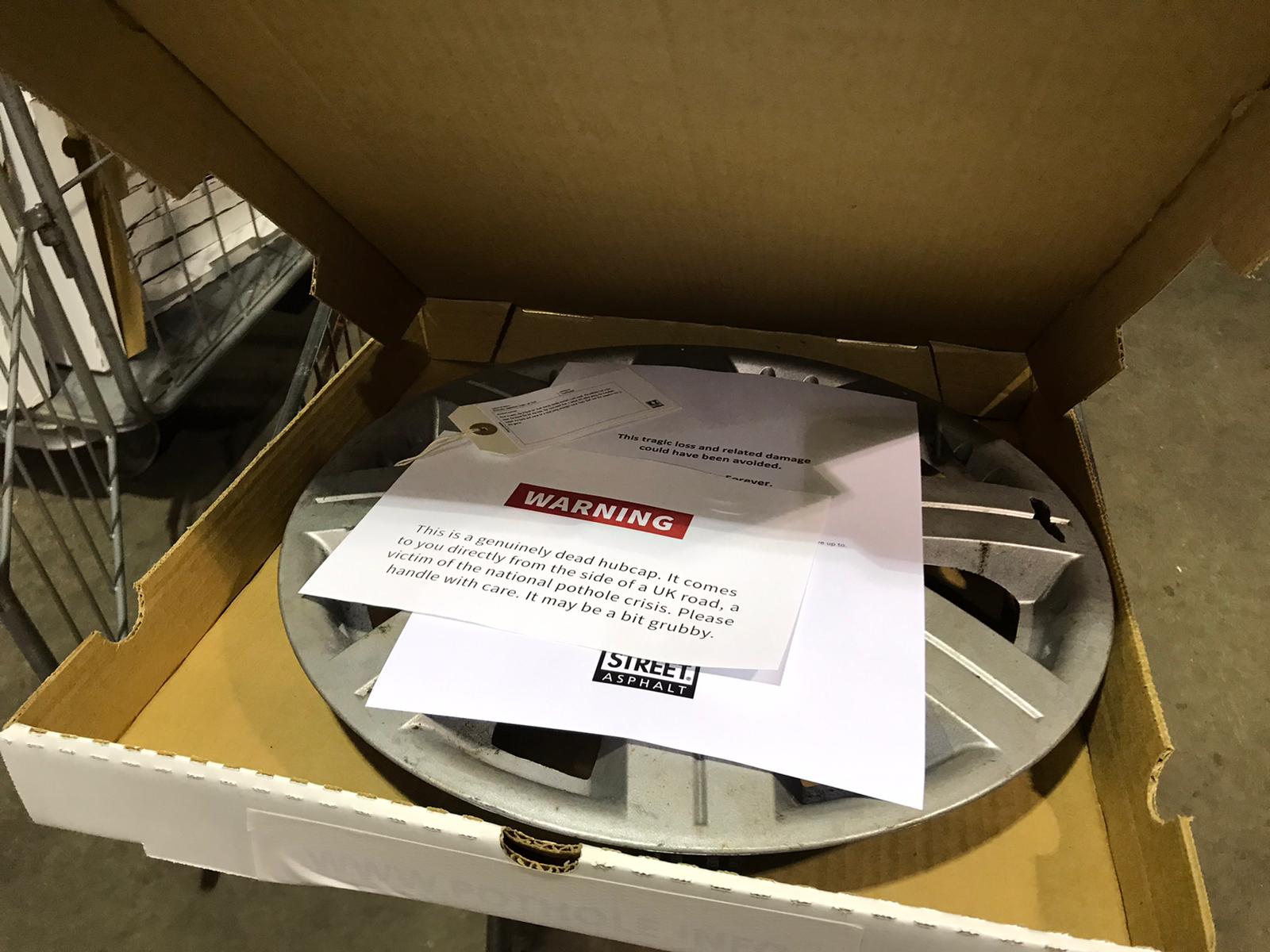 “Dead” hubcaps being sent to UK media to illustrate how bumps in the road can and do damage cars (and trucks/lorries) on the road.

As it so often happens, hubcaps are easily jarred from their mounts and roll to the side of the road – lonely, forgotten and sad.

“…he drove into a pothole the size of a bathtub. It’s understandable how I was left for dead. The damage was major.”

“Ka-blam! She hit the hole. The tyre went flat. I popped off, rolled along the macadam, hopped the kerb, and came to a stop.”

The wet weather in the UK that provides them with lovely, green and rolling hills is also why the country has problems with its pavement. Moisture, both frozen and not, is a primary culprit in causing potholes. So too is heavy vehicle traffic, summer heat, and neglect of small cracks before they grow into something much worse and more expensive.

Winter repairs come with challenges. So called “throw-and-go” cold asphalt products are commonly used for temporary pothole repairs in countries around the globe. Frustratingly, these repairs prove ineffective within days or weeks. This method also requires road crews to return in warmer, drier weather to fill the hole with a more resilient patch. But more sophisticated and permanent cold-asphalt treatments, such as EZ Street from Red Stag in the UK, cut that to a single repair, even in cold and wet conditions. 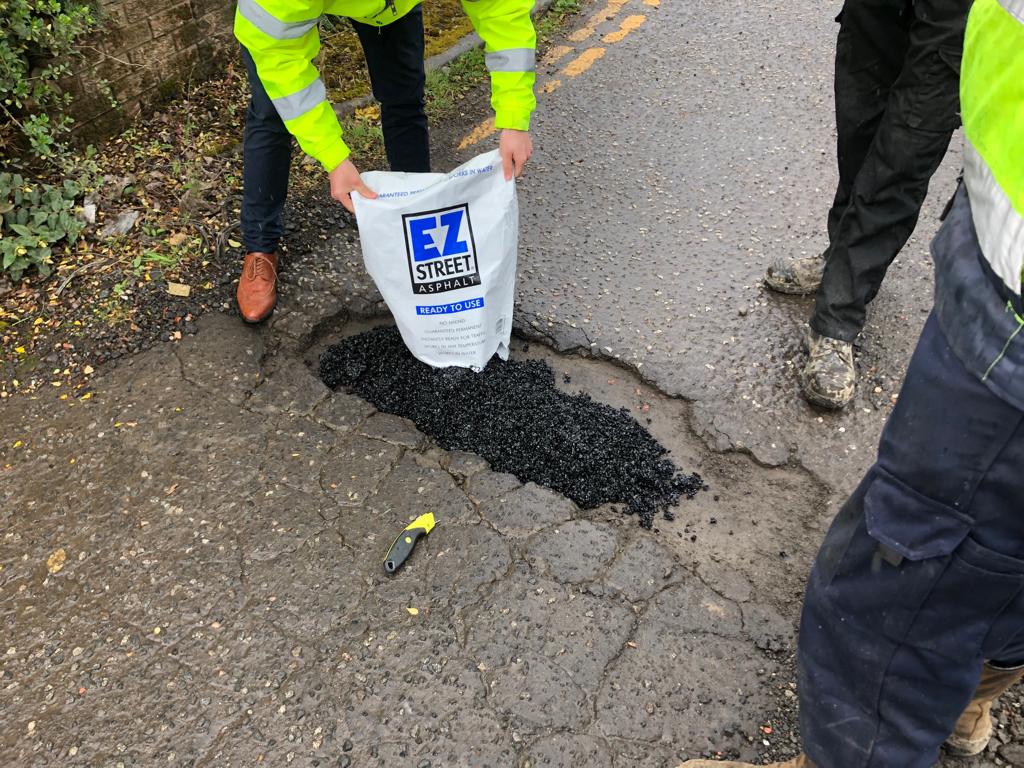 EZ Street cold asphalt is unusual in that it creates a permanent fix from a single application, even in winter and wet conditions.

The Telegraph, a London-based daily newspaper, reported last August that if all the potholes in England were combined they would drop 15 times deeper than the lowest point in the American Grand Canyon. The country’s definition of a pothole is any dip in the road surface of 40mm or greater. It’s more than costly to repair and rebuild the roads – damage to vehicles is expensive as well. More than £1.9 million was paid out in compensation to motorists who suffered vehicle damage due to those dips in 2018.

Stateside, we think of our pothole problems as a function of climate, but that is misleading. New York, Boston, Chicago, Cleveland and Minneapolis all have pothole repairs to make on a continual basis, particularly in winter and spring months. But Los Angeles, Houston and Honolulu have lots of pothole problems too.

Attention to road maintenance can make the difference between good and bad asphalt. Places like Michigan and Pennsylvania, in similar climate zones, reportedly have different degrees of bad pavement despite their similarities in weather and traffic.

How can that be? According to Crain’s Detroit Business, a weekly newspaper and news website, the Motor City’s state spends $154 annually per capita on roads while in states such as Pennsylvania that number is $530 per person. Drivers in Detroit shell out $865 per motorist per year for car repairs related to poor road conditions, versus a national average of $377. There are clear correlations between good roads and lower costs to drivers in repairs.

The American Auto Association (AAA) reports that vehicle repair bills related to pothole damage have cost US drivers $15 billion over the past five years. Flat tires, bent wheels and suspension system components were the most common damages.

America officially observes National Pothole Day on January 15 as well. But it seems we don’t give it the royal treatment the way the Brits do. Perhaps now that Harry and Meaghan are relocating to North America maybe this tradition can come over to the colonies – because America’s accumulation of potholes could probably go deeper than 15 Grand Canyons.