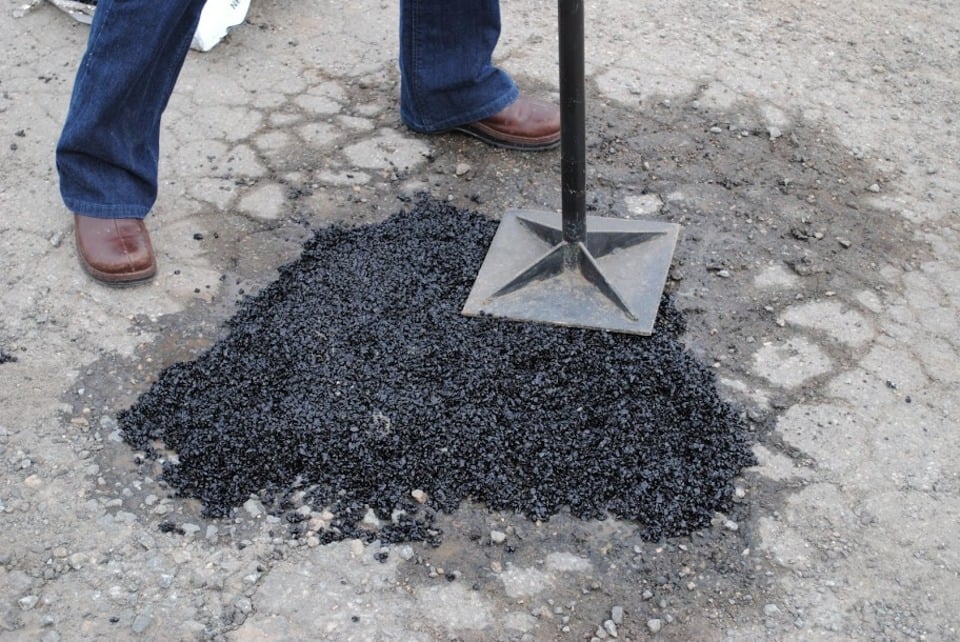 In the widening gulf between municipal budgets and road pavement quality, is there any hope the roads will get fixed?

Every mayor in America – and Canada and much of the rest of the world – gets elected on a promise to fix potholes. But when elected officials settle into the executive suite they often find out they have about 30 cents available for every dollar needed to fix those potholes – and that putting off those repairs for three or four years will mean the math gets much, much worse. The pavement deteriorates exponentially over time while road maintenance budgets shrink.

Making matters worse, the throw-and-go method of using hot mix has two additional deficiencies. One is that its use is restricted in cold and rainy conditions. The other is because a low-quality hot mix rarely lasts more than a few months. Reapplication of hot-mix in warmer months multiplies material and labor costs several times over. Meanwhile, those mayors and their departments of streets get an earful from dissatisfied citizens who have damaged cars and drive in slower traffic due to rough pavement.

A growing number of cities, counties and businesses, however, are working with a new kind of asphalt that solves these problems. A polymer-modified cold mix asphalt, already in use for more than 15 years in a variety of applications across the U.S., is being used in the northern reaches of Canada as well as other extreme environments around the world. The results are encouraging.

This cold-mix asphalt, provided exclusively by The EZ Street Company (based in Miami, Florida with worldwide distribution in more than 20 countries), has been largely marketed as a permanent pothole repair material. More recently, it is used as a top layer in larger scale paving projects. With operational and performance advantages that translate into net cost reductions, it has been described as “a game-changing product” by Aggregates & Roadbuilding, Canada’s Rock to Road Magazine.

In their November/December 2010 issue, the magazine provides a case history of a project in Yellowknife, Northwest Territories, where a resurfacing project where the EZ Street product was used on a 10 meter x 100 meter section of roadway, which was laid over a layer of gravel in -6 degree Celsius (21 degrees Fahrenheit) air temperatures. Compaction with traditional equipment application reduced two 2-inch lifts to about 3 inches of pavement. No heat process was used. The road was reopened immediately after compaction.

As Aggregates & Roadbuilding explains, the cold mix product is also hydrophobic, meaning it can be installed in standing water – a key point given the propensity of puddles to happen in potholes. Other product features: permanency (repaired utility cuts and potholes from the 1990s are still intact), it can be stockpiled (available for use at any time, without carefully-timed trips to the hot mix plant) and it is traffic-ready immediately after installation.

In other words, if it works in the subarctic, it will work to fix potholes in Toronto, Montreal, Quebec City, Minneapolis, New York, Boston and Chicago. In fact, many smaller communities near these large cities have used the product for many years.

Near wet Vancouver, British Columbia, where frequent freeze-thaw cycles are tough on pavement, a December 2010 application was both successful and yielded another benefit: noticeably quieter pavement.  The contractor using the materials said, “It is like pressing a mute button when traffic passes over the pavement.”

Another extreme application was in the El Teniente Copper Mine, roadways that run deep inside this mine at 2,300 meters (7,500 feet) above sea level in the Chilean Andes. About 375 kilometers of the subterranean roads are paved, which was traditionally done every six to twelve months (with hot mix asphalt) because constantly running water and heavy equipment wore it down quickly. The polymer-modified cold mix was first used in 2001. Mine managers found that material, equipment and labor costs were less expensive and provided a more uniform surface. The road is still in use today in 2011.

Back in the U.S., the polymer-modified cold mix asphalt was used to repair longitudinal cracking on highway I-36 outside of Boulder, Colorado. This was applied under warmer conditions – air temperatures were 70 degrees – and during the night so as to minimize traffic disruption. Three tons of the asphalt effectively repaired the seam over a 2-mile stretch of highway in a single application. This was after a different, lower-quality cold mix asphalt formulations and hot rubber crack fillers had failed to complete the job.

As paving contractors and department of transportation administrators understand, the costs of road building and repair includes four factors: machinery, materials, labor and material waste. A fifth factor, traffic interruption before and during repairs, is a cost borne by the public and no less a consideration when planning pavement maintenance.

EZ Street cold asphalt requires no special equipment, other than to disable heating machinery, needs to be used. As a material, the polymer-modified cold mix is about 20 percent more expensive (variable by region), but labor costs are generally less because there is no “race the clock” requirement to rake and level a cooling hot mix. Note this offers a worker-safety advantage as well, and the learning curve for work crews is relatively short and flat. Waste is virtually eliminated because the product stores up to six months, often longer, in stockpiles.

Those advantages are multiplied if they reduce the need to re-repair rough pavement, as is often the case with hot mix – particularly for potholes repaired in adverse conditions in winter or spring, which frequently must be redone in summer. A 2010 study published by Trevecca Nazarene University under Porter King, PhD. by student James Gregory Bearden looked at these factors of man-hours and materials required with traditional hot mix and the polymer-modified cold mix. The study concluded that the latter provided a 72 percent reduction in net costs.

As the Yellowknife, N.W.T. experience shows, winter-set repairs are just as permanent as those done in June – which is particularly important in climates where the summers are short.

If anywhere there is a stretch of pavement that matters, it is on airport runways. For example, officials at Chicago’s Midway Airport had to close one runway in January 2011 for several hours after an epoxy material used to patch a pothole became dislodged. An Internet search shows that potholed runways are a scourge in developing nations such as India and several countries in Central America and Africa.

The Miami-based company’s polymer-modified cold mix has been used effectively at Santiago (Chile) International Airport, Langar Civil Airfield in Nottingham, UK and Andrews Air Force Base near Washington, DC. According to Aggregates & Roadbuilding, the U.S. Army Corp of Engineers evaluated the product on its use for expeditious pavement repairs and it earned the highest stability scores among nine materials tested.

Over the next few years, cities, counties, states and the federal highway administrators – as well as owners of private property such as shopping centers and residential developments – will give close scrutiny to the difficult equation of aging pavement and thinning budgets. A rational approach will be to consider all costs, beyond materials, involved in pavement maintenance.