With any business start-up, there is the lingering question of “if you build it, will they come?” And even if they do, will it mean anything?

But that is not the worry with developers, investors or users of SeeClickFix, the phone app enabling citizen engagement in pothole abatement. Citizens are coming, local governments are responding – and the potholes are getting fixed.

The surprise is that all these volunteer pothole reporters are also helping municipalities save money. Public employees who used to be tasked with finding the potholes and receiving phone-in pothole complaints can now shift to other functions. That might include more crews who actually repair the streets – to the cheers of motorists, cyclists and elected officials. 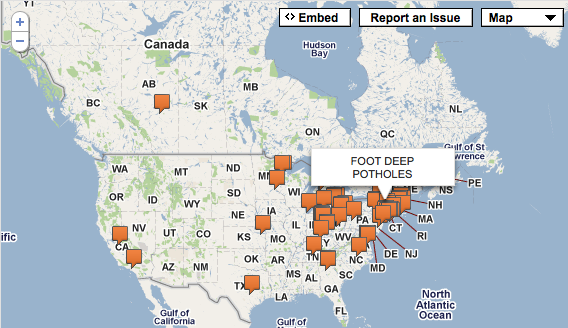 “For local governments, it does require some upfront investment,” founder Ben Berkowitz told Pothole.info. “But there are savings down the line. One city tells us they spent between $9 and $15 per phone call [when citizens report potholes the old fashioned way, by phone]. But when SeeClickFix generates repair requests through the Web, that cost is eliminated.” He adds that reporting redundancies – two or more people phoning in the same pothole but with vague instructions that send repair crews out multiple times – are largely eliminated with the photos and GPS locator functions of the SeeClickFix app.

Already, a total of 90,000 civic problems – potholes, as well as all other non-emergency issues such as broken streetlamps, non-operating playground equipment and graffiti – have filtered through the SeeClickFix system to appropriate government agencies. Tracking indicates that about 50 percent of them have been resolved thus far.

Why SeeClickFix is working – and potholes are disappearing

Part of why SeeClickFix has taken hold with citizen users is due to the exploding interest in smartphone apps. Another part of SeeClickFix’s early adoption and growth is due to its intuitive simplicity: You see a pothole, take a picture of it and upload it to SeeClickFix, where the GPS coordinates and photo are sent to the municipal entity that maintains that particular highway, road or street. Tracking maps on the app Website (SeeClickFix.com), on more than 700 local news sites and on many government sites provide transparency and accountability, a way for these municipalities to report progress and citizens to see how effective their efforts are.

But part of why it’s working is how phone app users – who by and large skew younger, including the Millennial generation, ages 21-33 – are inclined to get involved in community work of a sort. With a study conducted by Hart Research Associates on behalf of the Center for American Progress and its “Doing What Works” project, analysts Guy Molyneux, Ruy Teixeira and John Whaley issued a report (“The Generation Gap on Government, Why and How the Millennial Generation is the Most Pro-Government Generation and What This Means for Our Future”) in 2010. The study identified where and how younger people – also the largest users of social networking tools – are predisposed to believing that government should solve problems.

This generation, says the report, grew up with Web-based tools for organizing, sharing and meeting. It’s no stretch for them to see an app as a tool for change – particularly if the change is as visible as a pothole repair. According to a high-ranking official in the British government under former Prime Minister Tony Blair, quoted in the report, “What really grabs headlines is the way a government handles (or mishandles) a crisis.  But what changes people’s lives is how a government handles routine functions; everything from pothole repair to ensuring all government Web sites are active and populated with accurate content.”

Millennials also believe that large goals can be achieved through the efforts of individuals working in large groups. Some cite “swarm theory,” where large groups comprised of simple, singular “intelligences” can solve complex problems very efficiently, as a correlating concept. It is observed in the animal kingdom (e.g., ants and bees), and operates in a similar fashion with social networking.

In other words, if hundreds of people in a medium-size city take camera phone pictures of potholes and then forward them on to the city’s streets maintenance department, more of the most important potholes will be filled and fixed faster. Net result: a whole city will become more drivable.

It also doesn’t hurt that SeeClickFix is ramping up its operation with some key funding from venture capitalists and other investors. As of February 2011, the enterprise had secured $1.5 million financing that will enable a robust 2.0 version and an increase in staff to support it.

SeeClickFix revenues are generated by municipal software licenses and advertising. The app is chronicled in a chapter of the book Next Generation Democracy: What the Open-Source Revolution Means for Power, Politics, and Change (Jared Duval, Bloomsbury USA, 2010), a review of recent events and developments in American culture. It suggests that citizen participation can sometimes solve the problems where large institutions, including government, fail.

Passive and active municipal use of SeeClickFix

You can’t help but wonder if SeeClickFix trespasses on turf in departments of transportation. How audacious is it that an app developer finds a way to throw a lot of work, in the form of complaints, on hard-working, cash-strapped street maintenance departments?

“Anyone in government who neglects feedback will ultimately see a negative effect,” says Berkowitz. “But if they hear about how several municipalities are saving money, it’s good incentive.” Berkowitz explains that initial resistance over transparency concerns are giving way to excitement over the fact that citizens are pitching in, doing some of the harder work of problem detection.

He offers as an example New Haven, Connecticut, where the company is based. “They’ve saved hundreds of thousands of dollars in staffing,” he notes, along with emphasizing that fixed potholes make for a happier electorate.

Berkowitz also notes that there are three levels at which cities, counties and states can participate in SeeClickFix:

SeeClickFix Pro: Basically, all municipalities will receive emails whenever a pothole is reported, regardless of whether they establish a formal relationship with the app. But by signing up for the Pro service, a city is able to manage reported issues with SCF-supplied software. The app provider has assembled a database of 14,000 individual email addresses for various functions that the app covers (streets, parks, non-violent crime, etc.). Cost to the municipality is $40 per month.

SeeClickFix Plus – Subscriber governments get additional SeeClickFix services that include custom mobile app interfaces, automated personal emails and a contest function that engages citizens to a greater degree. Cost is $100 per month per 100,000 population.

SeeClickFix Connect – This is the premium service that adds a full CRM (customer relations management) function to the process, minimizing staff involvement while increasing the degree of satisfaction by citizen app users with expedited repair communications functions. Costs are worked out on an individual basis.

It doesn’t stop with potholes

Potholes are generally among the most extensive, ubiquitous, visible and costly problems facing governments and their citizens. Due to aging infrastructure and a tendency to reduce maintenance operations when city, county and state coffers are running empty, roads that were built 40 and 50 and 60 years ago are deteriorating at a rapid pace. A crack in pavement today left unsealed allows water under the top layer, which undermines the sublayers that in turn lead to potholes.

Which is why potholes are a central part of what SeeClickFix fixes. “Potholes are the gateway drug to civic engagement,” says Berkowitz, who was named “Greatest Person of the Day” by the Huffington Post on December 2, 2010. He explains that when people see what they can do to fix pavement, they start paying attention to other activities and other problems in their community. They seek out graffiti, look for broken streetlights and traffic hazards. They also use a community organizing tool on the SCF site which is an open platform for addressing community needs. This tool enables like-minded people to find each other and come up with ways to create change.

“People are using this,” says Berkowitz. “They put it to work to design bike lanes, advocate for planting trees, mark dangerous intersections, and lobby for grocery stores where there are none.”

A similar app with an identical purpose was built in Portland, Oregon. There, with a tech-ready population and a city ready to embrace the influx of pothole complaints, the crews taking care of broken pavement have been doubled. Imagine halving the number of potholes found throughout the country in just a few years.

They built it, the people came – and local governments are responding. A new generation is giving the rest of us reason to hope.