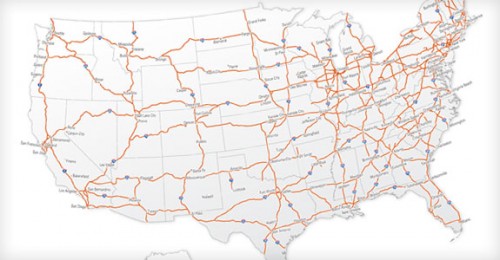 The Dwight D. Eisenhower National System of Interstate and Defense Highways is named for President Dwight D. Eisenhower, who championed its formation. As of 2006, the system has a total length of 46,876 miles making it both the largest highway system in the world and the largest public works project in history. The Interstate Highway System is a subsystem of the National Highway System.

Together, the united forces of our communication and transportation systems are dynamic elements in the very name we bear—United States. Without them, we would be a mere alliance of many separate parts.”

While Interstate Highways usually receive substantial federal funding (90% federal and 10% state) and comply with federal standards, they are owned, built, and operated by the states or toll authorities. For example, the original Woodrow Wilson Bridge (part of Interstate 95/495), was maintained by the federal government; its new span is now jointly owned and maintained by the states of Maryland and Virginia. There are also other Interstate Highways within the District of Columbia, which is federal territory.

This freeway system serves nearly all major U.S. cities, with many Interstates passing through downtown areas. The distribution of virtually all goods and services involves Interstate Highways at some point. Residents of American cities commonly use urban Interstates to travel to their places of work. The vast majority of long-distance travel, whether for vacation or business, uses the national road network. Of these trips, about one-third use the Interstate system.